Originally constructed in 1974, the Navarre Beach Pier has been a staple of this community for almost forty years. Boasting sales upwards of $265,900 a year, this pier is not only a great fishing spot, but it is also a place for families to spend a lazy day together. Back in the seventies, the pier measured an amazing 1,450 feet, but today, it stretches to a remarkable 1,545 feet. As a testament to its strength, Navarre Pier has survived three major hurricanes since the mid 1990’s.

The “T” section of the pier was completely destroyed in September 1995 when Hurricane Opal barreled through the panhandle of Florida. The damage was so extensive that the end of the pier had to be replaced and the pier store was relocated to protect it from future storms. Hurricanes Ivan and Dennis blasted through in 2004 and 2005, respectively, and forced the Santa Rosa county officials to construct an entirely new pier1. Some would say that these two hurricanes can be thanked for giving Navarre Beach a new, state-of-the-art pier that locals and visitors will be able to enjoy for many, many years to come.
The newly constructed Navarre Beach Pier opened to the public on June 5, 2010. After five long years of back-breaking work, this pristine pier has loads of new features to make it not only sturdier, but more resilient to future hurricanes. For example, the original “T” shape at the end of the pier is now an octagonal shape with a surface area pushing 3,800 square feet. The deck of the pier has over 800 breakaway boards built into it to help the integrity of the pier during high wave action during hurricanes. If high waves start to pound on the pier, these boards are made to detach themselves from the pier to help relieve the pressure, and therefore, saving the rest of the pier from extensive damage.

Also, the deck height has been raised to 30 feet to prevent waves from spilling over the top of the pier during all but the strongest of hurricanes. At last but not least, the pilings were even constructed at a 20 degree angle to help maintain structural stability during intense storms. These are just a few of the new features that you will get to see when you and your family visit the new Navarre Beach Pier!

Not only does the pier have a new look, but it is also safe for the environment. Navarre Pier is equipped with over 90 low wattage bulbs and concrete bollards to help protect sea turtles nesting in their natural habitats around the pier. The Santa Rosa County official website also pledges to keep the wildlife around the pier as undisturbed as possible by making sure guests know the proper steps to take in order to keep the wildlife flourishing in this part of the Gulf. It states that “signs are posted with safe fishing guidelines for the protection of sea turtles, birds and dolphins.

In the event that a sea turtle, bird or dolphin is hooked or entangled in line, phone numbers to call are posted on the signs. The pier is located in a federally designated critical habitat for the Gulf Sturgeon. Signage is located on the pier educating fishermen about the Gulf Sturgeon. Discarding fish wastes, bait and monofilament line is prohibited. Monofilament recycling stations are located on the pier.”
Families should come to not only for the great fishing found at Navarre Beach pier, but they should also come just to see the beauty of this ecologically-rich area of the Emerald Coast. 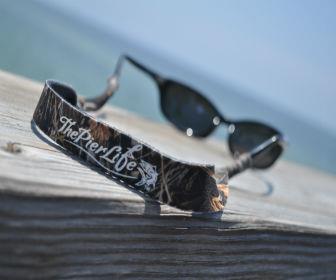